According to the EU cookie law, you must accept the use all the features of our websites
I Accept More Information 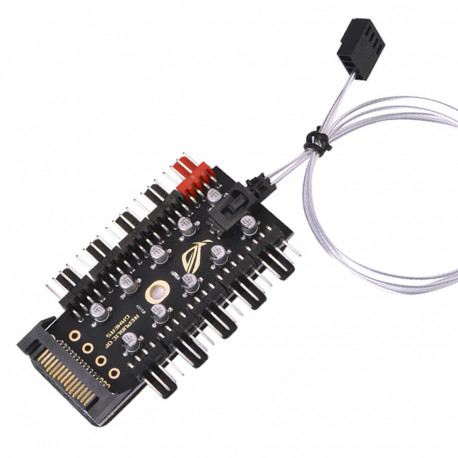 Shipping in 48/72 h with Express Courier

Card to connect 10 PWM fans to the PC.

Connection of fans with 4 Pin - for fans with PWM Speed ​​Adjustment.
Also suitable for 3 PIN fans (they will work at maximum speed )
The power supply of the FAN HUB and all the fans takes place from the Sata connector

There are two possible modes of use according to personal preferences:

2- PWM automatic regulation fans with CPU temperature:
With the supplied cable, connect the FAN HUB to the CPU connector in the motherboard, then the CPU fan to the FAN HUB in the CPU-5 connector (red)
The motherboard au tomatically it will adjust the speed of ALL the fans connected to the FAN HUB at the same time, as if they were those of the processor.

There is a 3M adhesive for convenient fixing on a PC or other.

ATTENTION
Make the connections with the PC turned off and check the wiring. Check the absorption of the components and that there are no overheating.
We do not undertake the burden of reimbursing failures resulting from breakages or malfunctions of components other than those sold by us